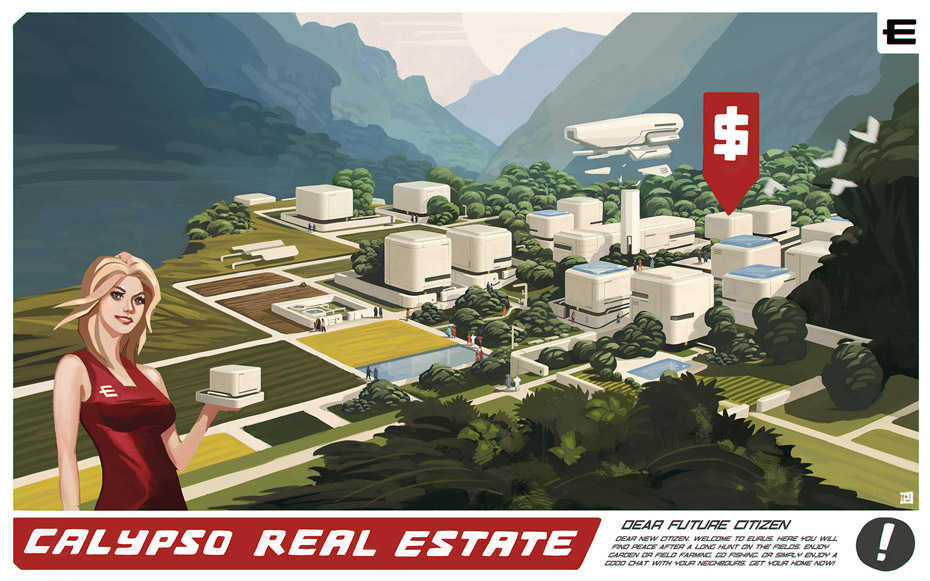 With version 15.3 of Entropia Universe, released on June 15 2015, the first stage of the Long awaited CLD Estate System became available on Planet Calypso. Calypso Land Deed (CLD) holders will initially have the opportunity to use their CLDs to bid on CLD Estate plots located in two beautiful new residential locations, Southern Ithaca and Livas.

Development of structures on CLD Estates will be implemented in the summer of 2016, with larger plots planned to accommodate more advanced structures with potential commercial functions such as shopping and more.

Plots are available in four standard sizes and will offer different development opportunities depending on size.

The Additional requirements in form of Composite Planks connects the CLD Estate System with the Resource Gathering System and thereby another important part of the Planet Calypso economy.

The Resource Gathering System, also introduced in release 15.3, allows Avatars to collect natural resources using special tools. The resources once collected can then be refined and manufactured into more precious materials like Composite Planks. Being a part of the Planet Calypso economy the resources and their refined materials can of course be traded on the public market. 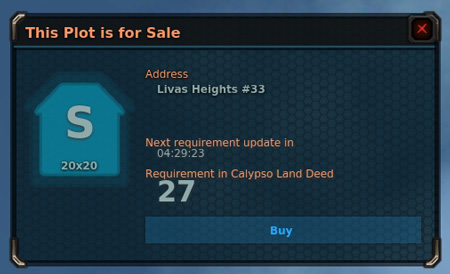 CLD Estate plots are acquired with Calypso Land Deeds. To acquire a plot, interact with the Plot Terminal located on the plot.

Some of the plots in the new settlements are reserved for future use and are not able to be claimed.

Each settlement features a large bazaar in the center as well as service centers on the outskirts and small 10x10m plots for monuments and other functions.

The next stage of Plot Ownership

In release 15.9.2 Planet Calypso reached the next exciting stage of the Estate System.  Plot holders on Planet Calypso will now have the possibility to become Virtual Land Developers and build their own centres of production and supply.

The UI will let you choose, preview and place your constructions on a grid. At this point you’ll be able to review all building costs. Once you’re totally happy you can proceed with the transaction, at which point you’ll be shown the construction time.

Constructions are upgradeable, allowing you to modernize and improve your builds. For example, outlying walls may boast elegant arches, gates and pillars!

In release 15.9.2, released on June 29 2016 only one type of house is available, but this is merely the beginning. We are continuously working on more developments!

The UI will let you place constructions within the grid. During placement, you can rotate it like when placing any item. When satisfied, the building will begin its first step towards completion. Once you’re finished you’ll be able to admire and enjoy your new property!

In release 15.10, released on October the 4th 2016 a Gardening System was introduced. The Gardening System will enable you to become a producer of valuable organic goods and a key player in the supply chain. You’ll literally be able to ‘grow’ an expanding business!

What if you don’t like the way you’ve built your house, or you want to build another kind of building instead? You can start again by demolishing the building and regaining roughly 50% of your initial investment, which can then be used on your next build!

As a Property Owner you are also a citizen of a village and the development of ‘village life’ will be the focus of future releases. Being a responsible village citizen will have a positive effect on the village community as a whole. This ‘communal’ dimension will be a new aspect of gameplay within Planet Calypso.

The Southern Ithaca settlement is wonderfully located near the waterways south of Ithaca. For settlers,  entrepreneurs and investors alike this area will offer a great opportunity to invest in the future of both Calypso and your personal Avatar. 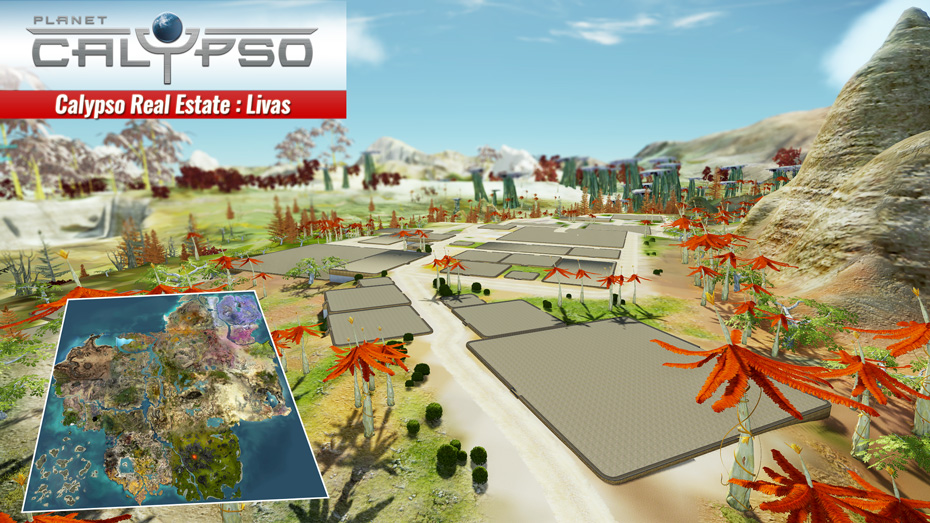 The Livas Settlement is located in the north-west of Eudoria in an area that displays a wide diversity in both its landscaping, flora and fauna. The location, being close to both the Fort Ithaca and Corint areas, is rumored to be considered a real gem for the entrepreneurial settler in the years to come. 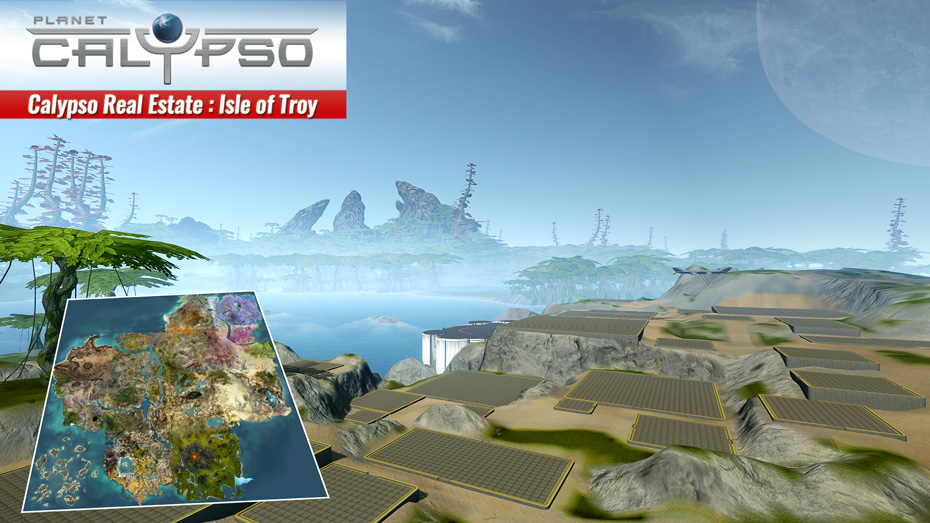 The Isle of Troy Settlement is located on the island Isle of Troy in the south-east of the Eudoria continent and has a gorgeous view of the ocean and the Scylla Mountains on the horizon. 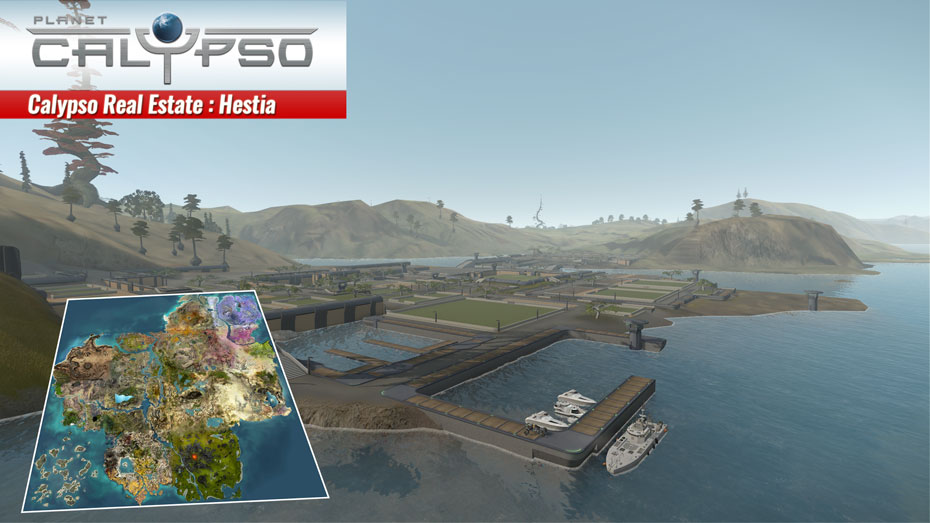 The Hestia Settlement is located by the inland waterways in the central areas of the Eudoria continent.  The near proximity to rich hunting grounds and other highly valued areas make the land plots in Hestia a formidable investment.