THE STORY OF MEDUSA’S HEAD

In the first Robot war, the Imperial Armed Forces were pushed back. As they retreated, Special Forces set up a hidden cache of weapons and supplies on an island off Eudoria. From there, they hit the robots both on Eudoria and Amethera. The base grew from a hidden supply cache to a fortress. Defense systems were set up at the outskirts of the remote island, and bunkers and a command center were built to direct the war. From there, they fought back and pushed the robots off the planet!

When the war ended and the base was no longer needed, Special Forces simply stripped it bare and left. For some time, it just sat there, unused and abandoned, until smugglers found it.

To the smugglers, it was perfect. It was hidden and close to the flight corridors to Athena and Port Atlantis. It would be easy for any smuggling ship captain to just slip out of the path and land, or just drop the cargo right down on the islands as you flew over them, without the traffic control ever knowing.

So the smugglers took over.

Of course, it wasn’t that easy. It wasn’t just one smuggler band. There were several, and they fought for control over the base. In the end, the Medusa band rose above the others and a truce was called. Medusa was firmly in control, but as long as that fact was respected, other bands were tolerated. They refitted the old base to serve their needs: Medusa’s Head.

The Medusa band ruled Medusa’s Head for many generations of smuggler bosses. But no empire lasts forever. Kessner, the last boss of the Medusa band, died. The official reason is old age and fast living, but some people whisper that it was murder.

Whatever the cause of death, there was a problem. The problem was that there was no clear line of succession. Again blood was spilt over Medusa’s Head. However, this time nobody came out on top. The government moved in to fill the power vacuum. They didn’t want to abandon Medusa’s Head to bandits and smugglers like they did last time, so they decided to sell the base and all that goes with it to the highest bidder.

For the smugglers, it is a sad end to their tale. The few splinters that were left of the smuggler bands had no choice but to get out of the way or adapt to a new and legal life. For everyone else, it is a new opportunity on the frontier, as the old smugglers’ den Medusa’s Head is for sale!

Harbingers: Strike teams have managed to sabotage and destroy the Harbinger deployment system! The robots’ advance has been halted dead in its track, despite Steelbirds and Harbingers. However, the robot factory in the Hadesheim crater has not been destroyed, and intelligence and strike operations aimed at the crater will continue. Colonists that have not yet signed up as CDF contractors can contact Colonel Briers in the Needle Tower in Port Atlantis.

No more rent: Rent for all shops, apartments and banks have been set to zero. If you have paid rent in advance for any period after December 8th, 2010, please file a support case for reimbursement.Our ambition is to compensate all claims in conjunction with the first release of 2011, which is planned for January-February. Claims made after this release will be invalid. 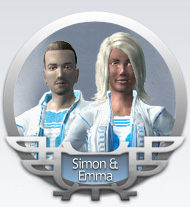