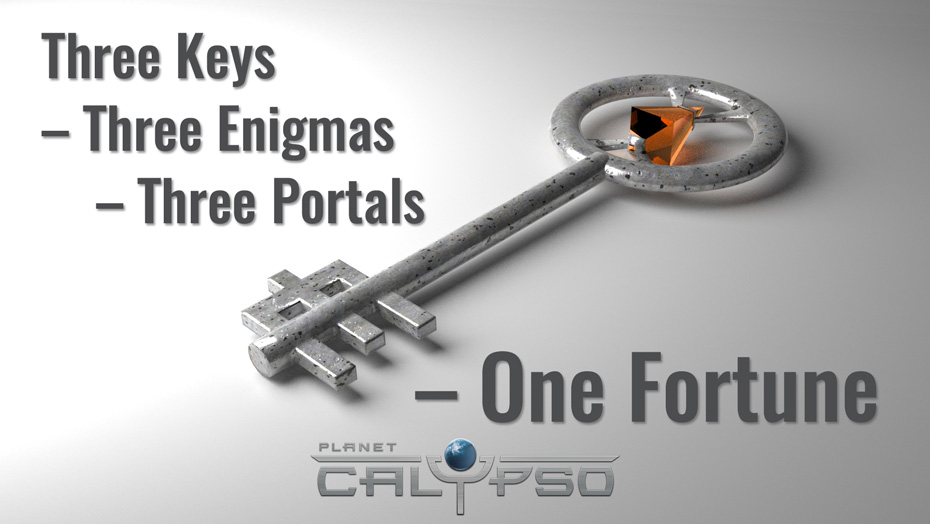 The Enigma Keys mission chain will be rolled out in three stages. The first player to complete all three stages will win the Main Event Prize.

All players that complete the three stages will receive Karona’s Velocity Jumpsuit featuring a 10% Acceleration speed buff. See below for a full list of mission completion rewards.

Here are the release dates for each stage of the mission chain:

Each of the three stages includes a Key, a Portal and an Enigma.

To complete a stage one must do the following:

The first avatar to complete all three stages of The Enigma Keys mission chain will win the following:

The player(s) in first place on The Enigma Keys leaderboard will receive:

Any players who tie for first place will all receive the above prizes.

Every participant that completes a stage will receive 5000 points. Bonus points are awarded to the first 6 players to complete each stage, i.e. the top ten scores will be:

Any player that completes a stage will receive the following items:

What is Entropia Universe? What is Planet Calypso?

Please see the Entropia Universe video tutorials for the basics on how to play. In addition, you should find a good mentor for guidance — you will also receive rewards after graduating as a disciple!

What gear do I need to complete the Enigma Keys stages?

The missions you will receive to collect key fragments in this event will include Hunting and Mining in the Calypso wilderness. Hunting and mining require equipment.

Prospecting and extraction equipment are needed for mining, and a weapon is needed for hunting. A full set of armor is highly recommended. Starter Packs are available in the Entropia Universe Webshop and contain gear to help you get started. The Gold starter pack is recommended for this event.

Can I get help inside the game?

As a newcomer it is easy to get help from veteran players through the Chat System. Try the “Rookie” chat channel for any general questions. You can also find a Mentor. The Mentoring system connects more experienced players with newcomers and helps them to learn the game basics quicker. When you graduate as a Mentors Disciple both Mentor and Diciple receive useful items as rewards.